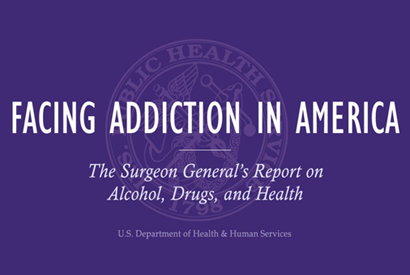 “Alcohol and drug addiction take an enormous toll on individuals, families, and communities,” said U.S. Surgeon General Dr. Vivek Murthy. “Most Americans know someone who has been touched by an alcohol or a drug use disorder. Yet 90 percent of people with a substance use disorder are not getting treatment. That has to change.”

The report, Facing Addiction in America: The Surgeon General’s Report on Alcohol, Drugs, and Health, addresses alcohol, illicit drugs, and prescription drug misuse, with chapters dedicated to neurobiology, prevention, treatment, recovery, health systems integration and recommendations for the future. It provides an in-depth look at the science of substance use disorders and addiction, calls for a cultural shift in the way Americans talk about the issue, and recommends actions to be taken to prevent and treat these conditions and promote recovery.

The report calls for addiction to be recognized as a major medical disease, not a moral weakness.  “Science tells us clearly that addiction is a disease of the brain,” said Murthy. “It affects the circuitry of our brain that controls decision-making, impulse control and our stress and reward systems.” Substance use disorders typically develop over time following repeated episodes of misuse that result in changes in the brain.

“Although substance misuse problems and use disorders may occur at any age, adolescence and young adulthood are particularly critical at-risk periods,” Murthy said. “Preventing or even simply delaying young people from trying substances is important to reducing the likelihood of a use disorder later in life.”  People who use alcohol before the age of 15 are four times more likely to develop an alcohol use disorder later in life compared to those who have their first drink at age 20 or older.

The report also found that substance use disorder treatment in the United States remains largely separate from the rest of health care and serves only a fraction of those in need of treatment. The Mental Health Parity and Addiction Equity Act of 2008 and the Affordable Care Act in 2010 have increased access to these services, making it possible for more people to get the treatment and support services they need to get and stay well. Yet for a variety of reasons, including stigma, a treatment gap remains.  This treatment gap can also be attributed to other factors, including a lack of screening for substance use disorders, fear of shame and discrimination associated with addressing substance issues, a lack of access to and costs of care, and fragmentation of services in the health care system.  Additionally, many people seek or are referred to substance use disorder treatment only after a crisis, such as an overdose, or through involvement with the criminal justice system.

“It’s time to change how we view addiction,” said Murthy. “Not as a moral failing but as a chronic illness that must be treated with skill, urgency and compassion. The way we address this crisis is a test for America.”