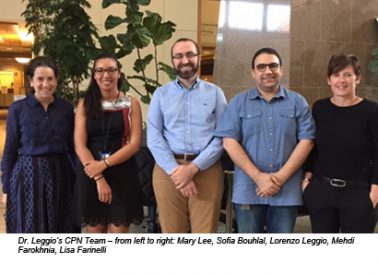 The Peter G. Dodge Foundation (PGDF) is pleased to announce that it has awarded a scientific research grant to the Section on Clinical Psychoneuroendocrinology and Neuropsychopharmacology of the National Institutes of Health (NIH), a joint intramural laboratory funded by the National Institute on Alcohol Abuse and Alcoholism (NIAAA) and National Institute on Drug Abuse (NIDA).  PGDF joins NIAAA and NIDA in funding the project, entitled, “Exploring Gut-Brain and Brain-Gut Interactions in Alcohol Use Disorder via Microbiota Investigations: A Pilot Study.” The study, led by renowned physician-scientist Dr. Lorenzo Leggio, will investigate the effects of alcohol abstinence and alcohol intake on gut microbiota.

The human intestinal tract houses a diverse and intricate microbial ecology. Changes in the gut microbiota – the set of microorganisms that live on and within the body – can impact health in positive or negative ways. A growing body of scientific literature links gut microbiota to a host of conditions such as cardiovascular disease, autism, anxiety, obesity, and gastrointestinal disorders. Preliminary work has documented changes in microbiota composition, inflammation, and intestinal permeability in patients with alcohol use disorder (AUD), and has shown differences in the composition of microbiota in AUD versus non-AUD patients. However, there is currently little to no research investigating the influence of these alterations on behavioral outcomes associated with AUD such as alcohol craving and relapse.

This grant, the second research grant awarded by PGDF, will support a pioneering study investigating the effect of alcohol abstinence and alcohol administration on human gut microbiota, seeking to determine whether these microbiota play a role in craving for alcohol and subsequent relapse in AUD individuals. An additional goal will be to conduct preliminary translational bed-to-bench work to see how and whether the patients’ microbiomes will modify alcohol-related behaviors in rodents, and whether that profile can be reversed after abstinence. These studies hold promise for establishing the microbiome as a possible therapeutic target area for AUD, with an eye toward developing novel treatments for the disease.

This highly innovative project will be conducted by a team of outstanding and accomplished scientists. Leading the study is Dr. Lorenzo Leggio, M.D., Ph.D., M.Sc, who is Chief of the Section on Clinical Psychoneuroendocrinology and Neuropsychopharmacology (CPN) at the National Institutes of Health. Dr. Leggio’s CPN team is particularly interested in the role of the gut-liver-brain axis in alcohol-seeking behaviors, conducting translational and clinical outpatient and inpatient studies in order to identify possible novel medications for addiction. Dr. Leggio’s clinical research has focused on the treatment of alcohol use disorder and on the medical consequences of alcohol use disorder, with a special emphasis on alcoholic liver disease. His laboratory has pioneered clinical research on the role of neuroendocrine signaling in alcohol-seeking behaviors via human laboratory studies, with a special emphasis on the role of appetitive pathways, such as ghrelin, leptin, oxytocin and glucagon-like peptide 1. Among other awards, he has received the 2008 European Society for Biomedical Research on Alcoholism (ESBRA) Nordmann Award, the 2016 Research Society on Alcoholism (RSA) Early Career Investigator Award, the 2015 NIAAA Clinical Service Award, and the 2016 NIAAA Mentoring Award.

“My team and I are very grateful to The Peter G. Dodge Foundation,” said Dr. Leggio, “for supporting this very exciting project. The bidirectional role of the microbiota-gut-brain axis in neuropsychiatric disorders is becoming increasingly recognized but little is known in AUD. Not only does this project expand our focus on the role of the gut / brain signaling in AUD, but also it will provide preliminary data that may represent the basis for the future development of novel treatments for patients who suffer from AUD.”

“We are very pleased to have the support of PGDF in this highly innovative area of research,” adds NIAAA Director George F. Koob, Ph.D.