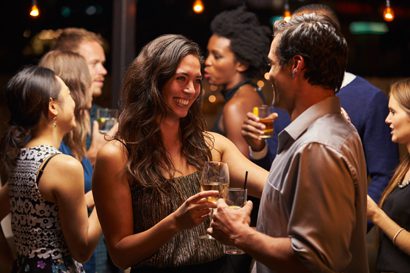 A study conducted by researchers at Boston University School of Public Health (BUSPH) has found that of American adults who drink alcohol, about 40 percent drink at levels associated with negative health consequences, and without intervention they are likely to continue doing so.

The study, published in the Journal of Substance Use, identified multiple factors associated with starting or stopping drinking too much. Forty percent of respondents reported that they drink at at-risk levels, that is, above the definition of low-risk drinking as defined by the National Institute of Alcohol Abuse and Alcoholism (NIAAA). At-risk drinking was defined as averaging more than 14 drinks per week or more than four on one occasion for men, and more than seven per week or more than three on one occasion for women. NIAAA research shows that only about 2 in 100 people who drink within these limits have alcohol use disorder, the clinical term for alcohol addiction.

The study was based on interviews of more than 34,000 adults who completed the National Epidemiologic Survey on Alcohol and Related Conditions in 2001–2002 and again in 2004–2005.

The biggest predictor of at-risk alcohol use was younger age of first use, particularly among participants who were under the drinking age at the time of the first survey. Additionally, for those who transitioned into risky alcohol use, that is, started in the low-risk group at first survey and transitioned to the high-risk group at the second survey, starting to drink too much was associated with first reaching the legal drinking age, being male and white, and smoking and drug use, among other social factors.

Predictors of continuing to drink too much, that is, beginning in the high-risk group at the first survey and staying there in the second survey, were being younger, being male, having an alcohol use disorder and using tobacco or other drugs.

Predictors of transitioning from higher to lower-risk alcohol use were being Black and/or Hispanic, receiving alcohol use disorder treatment and having children between the two rounds of the survey, according to the study.

“Some people just stop drinking too much, but most continue for years, and others not drinking too much will begin doing so during adulthood,” said lead author Richard Saitz, professor of community health sciences at BUSPH. “Public health and clinical messages need repeating, particularly in young adulthood. Once is not enough.”

“These findings suggest that not only do many people who drink, drink amounts associated with health consequences, but that without intervention they are likely to continue to do so,” said Saitz. “Screening or self-assessments, and counseling, feedback, or public health messaging have roles in interrupting these patterns. The predictors we identified may help target those efforts.”