Study: For those with AUD, it’s easier to quit drinking than to moderate. 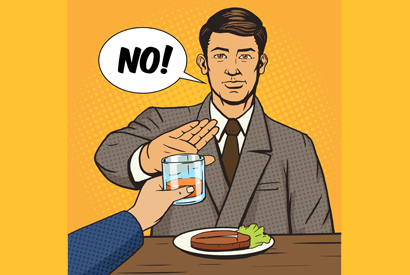 Researchers in Sweden have found that people who enter treatment for alcohol use disorder (AUD) wanting to quit drinking altogether are more likely to achieve their treatment goal than those whose aim is to reduce and control their drinking. The study found that this outcome was especially pronounced when those who wished to quit were supported by treatment providers who advocated complete abstinence.

Earlier studies have shown that an important factor in successful AUD treatment is patient/provider agreement on treatment objectives, meaning that both parties agree to aim for either full abstinence or a reduction in drinking. One of the key findings of the new study, however, was that even when a provider shared the goal of controlled consumption, those trying to learn to cut back and drink in moderation were not as successful as those who wanted to abstain from alcohol entirely.

The study, published in Alcoholism: Clinical and Experimental Research, followed 201 patients for two and a half years after they entered AUD treatment programs that focused on either abstinence or low-risk drinking.  Those seeking abstinence-only treatments were almost twice as successful as those trying to control their drinking. At follow up at two and a half years, 90 percent of those in abstinence-oriented programs had successfully stopped drinking, whereas only 50 percent of those aiming to limit and control their drinking succeeded in reducing their alcohol intake. This showed that a shared view between patient and provider was not the decisive factor in treatment outcome.

When people make abstaining from drinking their objective, the goal is clearer, stated lead study author Kristina Berglund, Associate Professor of Psychology at the University of Gothenberg Berglund. A person no longer needs to deal with decisions about what to drink, how much, and when. Ultimately, said Berglund, fewer people in abstinence-oriented programs relapsed over the follow up period, regardless of their personal goals.

“It is easy to believe that the patient and care provider having a common goal is the most important factor in achieving good treatment outcomes, but it is not that simple. Our study shows that, regardless of agreement on goals and methods, in the end it is more difficult to stick to controlled drinking than to give it up entirely,” stated Berglund.