A single question can screen for AUD in primary care 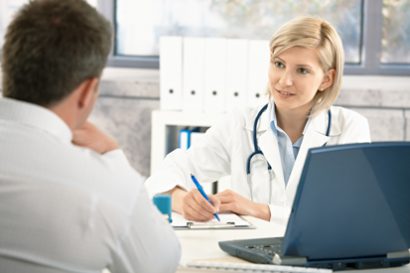 Asking just one question about drinking patterns can help primary care physicians screen for alcohol problems in their patients. Beginning in early adolescence, regularly screening patients for mental health and substance use disorders in primary care and other healthcare settings can lead to earlier care and a reduction in health and social consequences.

A 2016 study found that the best way to screen for alcohol problems in adolescents ages 18-20 was to ask one question: whether they had engaged in 12 or more drinking days, in which they had consumed at least one standard drink, in the past year. Thirty-one percent of those who reported drinking at this level had alcohol use disorder (AUD).  Adolescents between ages 12 and 17 who reported drinking at least one drink on three or more days in the past year were most at risk for alcohol problems. Among those who drank at this level, 44 percent were found to have AUD.

“Primary care physicians are encouraged to screen adolescents for alcohol problems, yet many do not, citing time constraints and other issues,” said National Institute on Alcohol Abuse and Alcoholism (NIAAA) Director George Koob, PhD.  “This study demonstrates that simple screening tools such as those in NIAAA’s Youth Guide are efficient and effective.”

In an online article calling for primary care providers (PCPs) to screen for alcohol use disorders, Ashley Hillis Davis, a nurse practitioner in Knoxville, TN, highlighted the important role health care providers play. “It is the responsibility of the PCP to address not only other chronic illnesses of the patient, but also any relationship to the patient’s alcoholism,” said Davis.  “As providers we need to focus on screening every patient, every time, in addition, to self-evaluating our technique for furthering our education and screening of alcoholics.  Ultimately, the goal should be to get them rehabilitation and referral to appropriate resources as early as possible.”

Screening is different from diagnostic testing in that it identifies people who are likely to have a given disorder, whereas diagnostic testing definitively confirms or denies presence of the disorder. Positive screening results may lead to a more detailed assessment or a brief intervention to help a patient determine their next course of action. NIAAA states that there is strong evidence that even patients who do not meet the criteria for alcohol use disorder, but who are drinking at levels that place them at risk for increased problems, can be helped through screening and brief intervention.

There are a number of screening tools that can help a provider to understand a patient’s relationship with alcohol and examine unhealthy alcohol use.  Screening for alcohol disorders can vary from a simple question to more extensive assessments using standardized questionnaires, depending on each situation and available time. A question similar to that used for adolescents has been shown to be effective in identifying adults who meet criteria for at-risk drinking: “On any single occasion during the past 3 months, have you had more than 5 drinks containing alcohol?” An affirmative answer means that the patient should be further assessed.

The AUDIT-C is a three item self-report questionnaire developed by a World Health Organization (WHO) initiative to help identify patients who are hazardous drinkers or have active alcohol use disorders.

AUDIT-C (Alcohol Use Disorders Identification Test-Consumption) questions are as follows with the corresponding points given for each answer:

Question #1: How often did you have a drink containing alcohol in the past year?

Question #2: How many drinks did you have on a typical day when you were drinking in the past year?

Question #3: How often did you have six or more drinks on one occasion in the past year?

The CAGE questionnaire, whose name is an acronym of its four questions, screens for problem drinking and potential alcohol problems. Two “yes” responses to the following questions indicate that the possibility of problem drinking should be investigated further. CAGE is derived from the four questions of the tool and intended to make it easy to remember: Cut down, Annoyed, Guilty, and Eye-opener:

Another screening tool is the longer 25-question Michigan Alcohol Screening Test (MAST) which may be used to obtain more qualitative information about a patient’s alcohol consumption and includes questions about drinking behavior and alcohol-related problems.

One of the best-known tools for screening patients is SBIRT– Screening, Brief Intervention and Referral to Treatment. SBIRT is an evidence-based practice used to identify, reduce, and prevent problematic use, abuse, and dependence on alcohol and illicit drugs.

Whether via one short question, or a longer test, detecting alcohol misuse and dependence early in the disease process allows providers the ability to initiate early intervention, and initiate a process for preventing further harmful effects and improving patient outcomes.

More information on the Alcohol Use Disorders Identification Test (AUDIT)>

The NIAAA Alcohol Screening and Brief Intervention for Youth: A Practitioner’s Guide>